Advent! After drawing up some ideas, my husband executed a Jesse Tree banner from the felt we had bought together. I’m glad he did such a good job because now we can use this every year. In fact, we are thinking of making more for other times of year because we like the look of the felt banner so much. (The emblems are another story as painting on felt has proved to be difficult...we may need to make new ones next year) 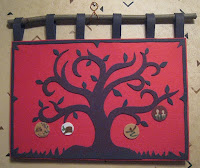 Andrei asked a good question, though: Why did they choose these specific passages?

As I mentioned before, I don’t like Advent readings that aren't obviously related to Christmas. So what does the call of Abram, for example, have to do with the Incarnation?

To me, the typical Jesse Tree passages that I've seen in reading schedules are just bursting with the harmonious thread of the Gospel that runs throughout the Old Testament. I remember the first few times doing the readings with my then-roommate Jenya, and just being newly in awe about how God fulfilled His promises to His people.

It’s a bit like the “5 (6?) Degrees of Separation” game. How do you get from Genesis 12 to Christmas? Abram is called to go on a mission. He takes a step of faith that leads to him receiving a promise from God that he will have many descendants, one of whom turns out to be Jesus.

Couldn't you just take any Old Testament story? Technically, yes…they’re all connected somehow. But the stories featured are usually from the genealogy of Jesus as recorded in Matthew.

In a way, it IS a crash-course in the Old Testament, covered in less than a month. It would be exciting, though challenging, to read through the whole OT during this period. I've never tried. But I like to think the selected passages give a similar effect. The theme of the Fall of Man and our need of a Savior is traced from generation to generation until we get to the birth of Christ.

What about just going through all the prophecies about Jesus, up until his birth? That would be fine, too. But then the “family tree” illustration wouldn't really apply. And to be honest, I lose the historical context and sense of sequence when I read the Prophets.  But that would be another thing to try one year.