How we got married the first time

It feels awkward writing about being legally married and making wedding plans at the same time. 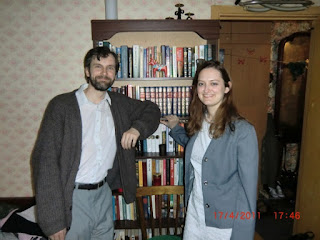 Whenever we mention to someone here that we already had our "registration," we get a big CONGRATS and "I didn't know! Already? When?"

Sometimes we wear our wedding rings, like when getting my new passport, or going for Andrei's U.S. visa. Legally we were allowed to do all this, as husband and wife. But in general we won't consider ourselves truly married until we've had the church ceremony.

So that's that. Just wanted to clear up any confusion. And now, for the civil wedding report: continue/-

After taking care of some necessary paperwork and applying for a marriage license, we had signed up to be legally married on a Sunday evening in April.

The wedding "palaces" were created during Soviet times when church weddings were outlawed, yet idyllic family life was advertised. In general they are very ornate and everything is done very ceremoniously. They were also designed to accommodate dozens of weddings a day, so everything is set up to trot all the guests and bridal parties through the program in a very efficient way, timed to the minute.

We arrived 30 minutes early (as instructed) and were ushered into the cloakroom. Then our guests were ordered to stay in a waiting room near the entrance, while we went upstairs to finish taking care of the paperwork.

This was my big moment: to make the decision about my last name. I told them I wanted to change it. "Cross out your maiden name," they said, "and write in your husband's." How symbolic!

Then they went to consult with some other employees and came back with a whole entourage, who wanted to warn me against taking Andrei's last name. I would have horrible problems, they said. The U.S. authorities simply wouldn't understand about noun declensions and my last name having the feminine ending. But I had done my research and made my decision. They made me sign a statement saying I had been "warned."

(the resulting problems were due to changing my MIDDLE name and not my last name...something I hadn't researched)

The marriage certificate was printed out right then and there, and we were shown into an ornate waiting room. Meanwhile, as soon as we were settled, our guests were led upstairs and into the opposite waiting room, as though they couldn't see us. But they came in to visit anyway. I was given a balloon. 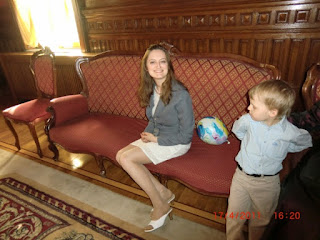 
As the big doors opened and the Mendelsson track came on, we processed into the room where our guests had been seated, and stopped on a swirly-thing in the middle of the carpet, per instruction. The officiant begin to give an elaborate speech, clearly trying to sound as dramatic as possible. I wanted to laugh, but needed to focus on paying attention to what she was saying. I didn't want to miss any instructions. 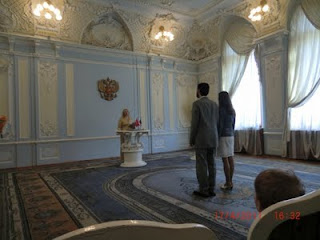 We affirmed our intent, signed our names, exchanged rings, shook hands...how long was it, 5 minutes?

Then everyone congratulated us and we rejoiced over our little victory. Husband and wife, under Russian law. 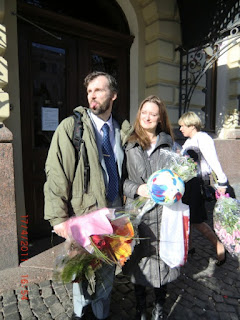