A visitor and the return of Misha

September 25, 2008
People are always blogging about meeting other blogging friends in person. Now it's my turn. A few days ago I met Mary, a young woman who reads my blog and arrived in St. Petersburg recently to work in transitional homes for older orphans. She visited the orphanage with me to see what I do.

As with all visitors, I decided to have Mary act like she didn't speak any Russian, so that the kids would have a chance to practice their English. 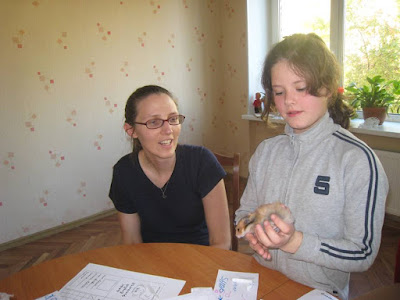 Misha had come right out to meet us when we got there. I hadn't seen him yet this year. He told me that he's being adopted in a few months. I'm really happy for him because he had seemed to be really longing for a family. Some kids are less at-risk, but with how withdrawn Misha had been lately, I think a change of environment is going to be good for him. He seems to be pleased with the prospect. 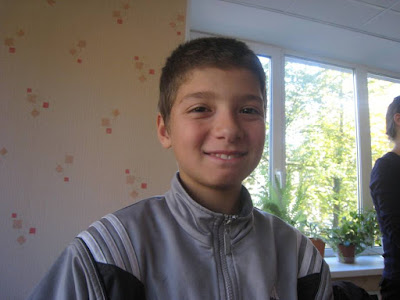 The English lesson went okay. It was chaotic as usual. I suppose it would be boring otherwise. 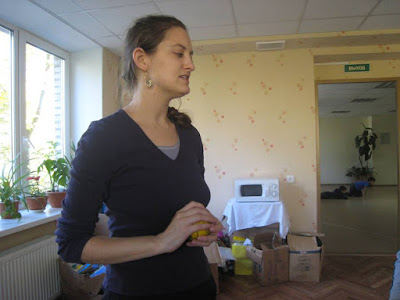 On the bus on the way home, we had a little adventure. A pair of young men got on with all these bags, and started to hand passengers books to "look at and give their opinion." Then of course the men started quoting prices. I quickly looked out the window to make myself unavailable.

Mary asked me a question in English and I answered quietly. Suddenly the men approached us.

"Excuse me, do you speak English?" Oh no, here it comes. They probably thought we had money and would love to buy some souvenirs. We both just stared at them. I saw no reason to speak English when I speak Russian fairly well. Mary didn't exactly want to engage in conversation either.

The talkative guy gave a little speech about the books in English. He said he would even give us one as a "gift." What a lie! We continued to stare at him. Then he started naming languages to see which we understood. Mary had a straight face, but I started laughing. Then Mary suddenly started speaking to me in Spanish. The man looked at me and accused me in Russian of being her translator. Nooooo. Then I kept having to translate from Spanish into Russian, but my Spanish is pretty rusty. Even after I said Mary didn't want to buy any books, the man kept asking us questions. He was intrigued, especially after Mary said she was from Ecuador.

The guy said to me in Russian, "So you're just learning Spanish, huh? And you get to translate for her? You're lucky, it's a good opportunity for practice." Umm, yeah.

Towards a bilingual education

October 01, 2019
Andrei and I argued about bilingualism years before we even started dating.

He wasn't convinced true bilingualism was really possible, and I was determined to have a bilingual child in order to prove him wrong. I don't think I actually expected that we would marry each other, but I guess the thought of cross-cultural marriage didn't seem so far-fetched.

Of course, I'm oversimplifying the discussion. Here are some of the issues we argued about:

-Young children will get the two (or more) languages mixed up. I've seen clear evidence to this NOT being the case. Kids do mingle languages, but this happens when they either are missing a vocabulary word in one language, or a word is just easier to say in one of the languages. There's a more scientific way to say this, but basically it's selective, not a moment of confusion.

Although our kids insert the "other" language into their speech sometimes, they also have no problem distinguishing between the two.…
4 comments
Read more

July 08, 2019
Currently compiling Russian visa applications for my kids. It feels way more relaxed than with a newborn (apparently I never told that story on here), but as always there are plenty of roadblocks.

I never posted about it, but in February we did a border run to Finland, and in the spring we also met with an immigration lawyer who said the kids could be added to my residency permit. So early one morning we dragged the kids out of bed, and set off for the Immigration Dept...Sophia threw up in the taxi...and it turned out the lawyer had been wrong. Technically, there is a by-law that lets you glue photos of your kids in your residency card (I have pages for it), but it's merely a formality to link you with them. The kids need separate residency permits.

So our options remained:

-keep doing visas every 3 years,
-get the kids their own residence permits, or
-apply for Russian citizenship

The visas are pricey and not the best long-term option, and we're not sure we want to get them …
9 comments
Read more