August 02, 2007
I've received a few requests for a report of my recent trip to Spain and Portugal, so I will give a few summaries. I'll start with Helsinki. While we didn't count it as a vacation, it was our transit point and an integral part of the trip.

-While still in St.Petersburg: The Russian lady accosting us in the middle of the intersection on our way to the bus, offering a better deal on a Russian bus for 15 euros. We accepted.

-Having a panic attack on the bus because we were soon headed for Portugal and didn’t speak a word of Portuguese; leading us to laugh over a pronunciation guide that described one particular vowel sound as a “strangled ‘ow’”


-Arriving at Helsinki before dawn and wondering how we were going to wait another 30 minutes for stores to open. Then realizing it was only 4:30 in Helsinki and we would have to wait a lot longer than 30 minutes.

-Realizing that Sabrina’s book about Lisbon had been left on the bus, and traipsing around Helsinki for over an hour (what else is there to do at 4:30?), tracking the buses that went by and asking a myriad of people until we finally figured out where the Russian tourist buses were parked. 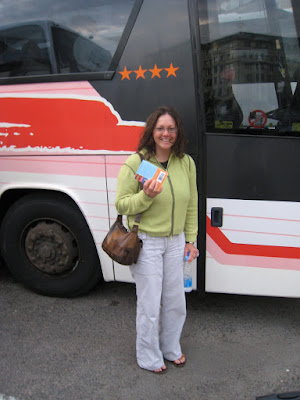 -Spending an eternity trying to operate the key to open the door to the Quaker apartment where we were going to spend the night. Knocking on all the neighbors’ doors and finally opening it ourselves.

-Falling in love with the Helsinki transportation system, particularly the tram, which we rode just for fun with our all-day pass. The metro’s interior couldn’t compare to St.Petersburg’s elegance, but we were in shock at the lack of crowds and absence of ticket inspection. They threatened a hefty fine for being caught without paying, but I didn’t see anyone get checked.